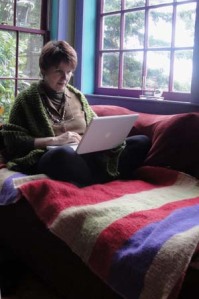 Twenty five years ago this month, Anne Sibley O’Brien received a phone call, the phone call that writers long anticipate; an editor called who wanted to publish her book. Since then, O’Brien, or “Annie” as islanders know her, has illustrated an impressive 29 books. Of these, she’s authored thirteen. Two of them came out just this year – Jamaica is Thankful and After Gandhi: One Hundred Years of Nonviolent Resistance (written in partnership with her son, Perry). Book number twenty eight rolls out in January.

O’Brien took time out from promoting her most recent book, After Gandhi, to meet with me in her home nestled by Peaks Island’s Backshore. A hefty box on her living room table held handsome promotional materials paid for by a Maine Arts Commission Good Idea Grant. By distributing these postcards nationally, Annie  is reaching out to adults who work with youth in peace studies or religious institutions with a strong social justice component. Her book events model the book’s content, that is, the events support social activism.

I asked her if she felt she was writing against the grain by showcasing peace makers as heroes. O’Brien replied “I think people all over the world are longing for peace. Everyone wants peace, but in some circles there’s confusion between peace and capitulation, passiveness, or other practices that have no spine. Anyone who works in peace making doesn’t have that confusion. Peace is hard work; it’s not easier than going to war. Opposing violence is a powerful thing to do.”

The Legend of Hong Kil Dong

It’s not easy to map the breadth of O’Brien’s talent. She’s a Mt. Holyoke College-educated studio art major who’s not only an author and illustrator, but the playwright and solo performing artist of White Lies, a theater piece informed by her experience growing up in South Korea as a missionary doctor’s daughter. White Lies explores storytelling, rather than guilt-laden and defensive discussion, as a way for white people to ally themselves with people of color in the struggle to end racism. Annie questions and illuminates cultural boundaries in her life, in her books, and on her blog, Coloring Between the Lines. 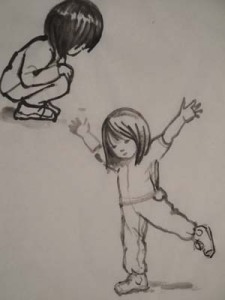 Sketches from the wall of Annie's studio

This month she was interviewed by the Korean media MBC who is filming a documentary series on the Korean superhero Hong Kil Dong, also the subject of a graphic novel Annie published three years ago. O’Brien credits consultant Kirsten Cappy of Curious City for the attention her “Korean Robin Hood” is getting this long after publication. “This is the first book I’ve actively promoted. Kirsten has helped me identify core audiences who aren’t reached by the standard publisher channels.” In the case of Hong Kil Dong, that meant Korean Americans; reaching this population took Annie to the Smithsonian Institution‘s National Museum of Natural History where she presented a Reader’s Theater performance of her book, in conjunction with the opening of a Korean collection. The Korean media took note. The Legend of Hong Kil Dong has also launched her onto the comic book scene – in November you can find her at the Kids Read Comics Convention of the Miami Book Fair International.

Hats off to you, Annie, for trying to make the world a better place, one book and one reader at a time!