Twain Braden: Ghosts of the Pioneers

When it comes to journeys, Twain Braden knows how to take them – and how to write about them. Professional mariner, lawyer, camp director, and writer, this renaissance man has returned to Peaks Island with his wife, Leah, and their four children after “living “away” since 2003. He returns with several published books and articles to his name with more in the queue.

A graduate of Hobart College and Charleston School of Law, Twain braves not only legal tomes but the unexpected adventures that wilderness trips and sailing the Atlantic Ocean or Caribbean Sea can throw at him. I got to know Twain and Leah as near-neighbors who had a son the same age as my daughter. Our shared stories broadened when my husband helped Twain (then co-owner of Portland Schooner Co with Scott Reischmann), sail the historic schooner Bagheera from Delaware up to its new home in Portland. These days, when he’s not sailing or writing, he’s directing Camp Glen Brook in Marlborough, NH.

Twain has published articles with Wooden Boat, Northern New England Journey, and Ocean Navigator. He also authored The Handbook of Sailing Techniques: Professional Tips, Expert Advice, Essential Skills (2003) and the non-fiction thriller In Peril: A Daring Decision, a Captain’s Resolve, and the Salvage that Made History written with Skip Strong (2003[2005] – both published with The Lyons Press.

Ghosts of the Pioneers

The summer before Twain graduated from law school in the spring of 2007, he and his family embarked upon a cross-country journey that led to the publication of Ghosts of the Pioneers: A Family Search for the Independent Oregon Colony of 1844. Twain blogged as they camped from Charleston to Independence, Miss. and then followed the Oregon Trail. In places, such as along a stretch of Rte 80 in Nebraska, major roads overlay the historic trail’s path. In other more rural areas, wagon wheel ruts remained visible. Twain’s first-person narrative  juxtaposes the story of the Independent Oregon Colony’s arduous journey westward with his family’s own modern-day trip. None other than documentary film director/producer Ken Burns said of Ghost of the Pioneers “This is a wonderful, close-to-the-earth book about the West, that magical place where the best of us met the worst of us and nothing was ever the same.”

Welcome back to The Rock, Twain, where writers are always welcome! We’re looking forward to the news of your next book, already in the hands of a publisher. 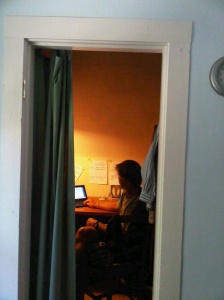