If you knew that my bookshelves harbored a large selection of pirate-related fiction and non-fiction, you could imagine how excited I was to sit down with neighbor and author-illustrator Scott Nash to discuss the imminent release of his first young adult novel, “The High Skies Adventures of Blue Jay the Pirate.”

This week, the library’s annual meeting provides island residents and visitors with the opportunity to hear Scott speak about his swashbuckling bird-pirates who navigate air ships through their old-growth forest as they evade predators and the strictures of a 17th century colonial government.

Scott lives on Peaks Island with his talented wife, Nancy Gibson Nash, and their rascally dog, Zephyr. As a neighbor who has lingered over fondue dinners with Scott and Nancy during long winter evenings, I know that Scott is a Renaissance man – he’s as comfortable listening to Mendelssohn while he writes as he is playing Johnny Cash on his mandolin or transfixing neighbors of all ages with performance art installations. Scott is known as an illustrator of more than 40 children’s books (Saturday Night at the Dinosaur Stomp is my personal favorite), but his talents extend more broadly. He assumes the Head of the Illustration Program at Maine College of Art this year and continues to lead Nashbox, a graphic design and creative studio based in Portland that focuses upon children’s media and brands.

It is the newest chapter of his career, however, that fascinates me most: becoming the author of a young adult novel. When I asked Scott what lured him from illustrating picture books to writing a chapter book, I discovered my own misconception that his writing and drawing would be separate processes. Scott said, “When I create a character in a sketchbook, it has a consciousness and I often find myself wanting to spend time with her, him or it. I draw to inform my writing and I write to inform my drawing. It is my peculiar way of realizing a story.” 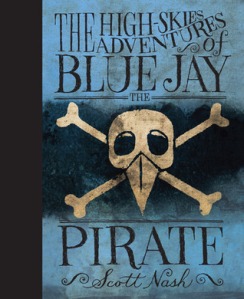 Scott handed me the advance copy of his book as though he was handing over a newborn for the first time. The High Skies Adventures of Blue Jay the Pirateis beautiful; I was struck by the classic look of its cover, font, and illustrations. Scott described how the classic chapter books of his childhood inspired him, “I loved how you would read the narrative and then you were rewarded with a picture. Then your imagination took over again with the narrative.” What inspired him to create this particular story? “Birds have always been important to me, but not the way they’re depicted in children’s media as just fluffy and cheerful. I see freedom, resilience, and a hardscrabble life when I look at them. And I’ve always loved pirates, of course. So, in this story, a 17th century colonial government [primarily an off-stage character] bans birds from migrating and condemns them to serfdom. The theme of migration allows me to explore what it means to be cultured, to be “civilized.” 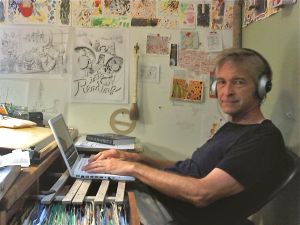 Scott Nash in his studio

Like most books, this one had a long gestation period and a lot of hard labor behind it. “It was initially three times larger. I loved where the research took me. It makes the fantasy more real to touch down into the history of pirates.” Scott credits his editor for helping him to hone the book to its current form. “Mary Lee Donovan, senior editor at Candlewick Press, and I have worked together for many years. She helps to drive the creative process; there just aren’t many author-editor relationships like that these days.”
And where does Scott like to write? “I’m nomadic. I don’t like to write in just one place. I like to find the place with the right energy.” That means you might catch sight of Scott writing in his car, on the Eastern Promenade, in coffee shops, or in his hammock or studio wearing headphones. Wherever it is, he’s chasing that good energy that fuels amazing work. Take time out to hear him this Wednesday.

Annual Meeting of the Friends of the Peaks Island Library on Wednesday, August 16, 2012 7:00 pm