The Girl Who Soared Over Fairyland and Cut the Moon in Two: Cat Valente 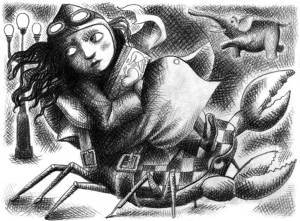 An illustration from The Girl Who Soared Over Fairyland

Peaks Island author Catherynne Valente has just published “The Girl Who Soared Over Fairyland and Cut the Moon in Two,” her third in a five-part YA fantasy series that has placed her on the New York Times bestseller list.

A reviewer for Booklist said, “As usual, Valente enlightens readers with pearly gleams of wisdom about honesty, identity, free will, and growing up. September often worries who she should be and what path she should follow, but the lovely truth, tenderly told, is that it’s all up to her. Thanks to a dramatic cliff-hanger ending, there is sure to be more empowerment and whimsy to come. Grades 5-8. –Sarah Hunter” and Times Magazine called it, ““One of the most extraordinary works of fantasy, for adults or children, published so far this century.”—Time magazine, on the Fairyland series.”

Recently, Valente spoke at Portland’s beloved Longfellow Books in Portland and this spurred some television coverage. I thought you might like to watch the television interview with Cat here or below 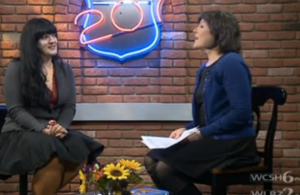 or watch a trailer about the series

Tagged as: Catherynne Valente, fiction, how to write a book, Longfellow Books, Maine, Peaks Island, The Girl Who Soared Over Fairyland and Cut the Moon in Two, YA fiction