When you’re reading a book, have you ever wondered: how do writers translate their imagination onto a page? I a 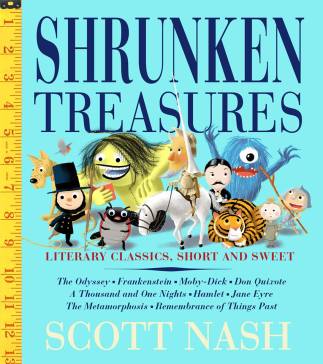 lways assumed that other writers work like I do by first conjuring, inhabiting, and experiencing a three-dimensional model of a scene in the mind before writing it onto the page. Peaks Island author and illustrator Scott Nash; however, does this iterative draw-write-draw magic that looks to me like a channeling of the subconscious through the hand. That was what I discovered sitting in his living room, asking him about his children’s book that Candlewick Press releases this month-Shrunken Treasures.

The origin story of Shrunken Treasures goes like this: while on a long car ride from Belfast, Maine, Scott and his wife, artist Nancy Gibson Nash, entertained themselves through long hours by condensing Moby Dick into children’s verse. Scott recounts,

“I’ve always loved doing mashups, even before it was trendy. So this was a challenge to mash up classics like Moby Dick and The Odyssey into a children’s poem. When I got home, I sketched out the Ulysses and Captain Ahab characters (see below) and sent off the idea to my editor. My editor is like the benefactor of my nutty ideas. I show up with a pile of sketches and a draft of a novel about bird pirates [referring to his High Flying Adventures of Blue Jay the Pirate] and they see the possibilities. This time I presented two sample poems and in iPad full of clunky sketches of the characters in the book. They’re risk takers. It’s lovely.”

That children’s book pitch became the beautiful picture book that I now hold in my hands. Short verses. Lean, yet rich and playful illustrations. I recognize Scott’s 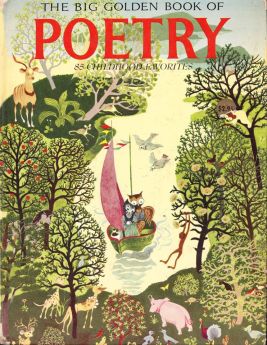 An inspiration for Shrunken Treasures

nostalgic nod to one of his inspirations, the Big Golden Book of Poetry. My own dog-eared copy of this childhood treasure was cherished for decades and was one of the items that I kept when I had to clean out my parents’ house.

Lucky for us, Scott moved on from sketching Ulysses and Captain Ahab to Mary Shelley (yes, of Frankenstein).

In Scott’s verse, Mary “first made one monster and then that monster made another one [Frankenstein].” Scott comments that, “the book would never have worked if the verse was more free. The classic stories are complex so that keeping the structure familiar helps to simplify the story.” 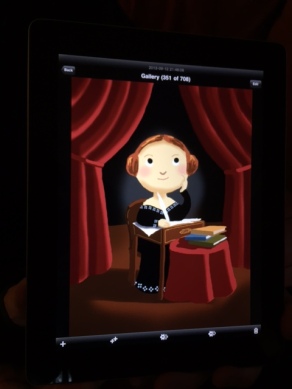 A character sketch of Mary Shelley, on Scott Nash’s iPad.

I predict this book will become a new classic and prove popular with multiple generations at once. Two upcoming events will allow you to hold Shrunken Treasures in your hands and seek the author’s autograph:

Prepare yourself for literary frolic.

Written by Patricia Erikson, Peaks Island Press offers behind-the-scenes glimpses of a vibrant, literary community perched on Peaks Island, two miles off the coast of the beautiful and award-winning city of Portland, Maine. If you haven’t already, you may subscribe in the upper right corner at http://www.peaksislandpress.com.