The next chapter: Peaks Island celebrates its retiring librarian

How does a Maine island celebrate the retirement of a beloved librarian who has served her community for 28 years? With cake–best measured in square feet–a table groaning with brunch foods, a glittery sash, original artwork, an antique memento, and lots and lots of hugs.

Portland Public Library Executive Director Sarah Campbell presented Priscilla Webster with an original, wooden library book box that had been used by the island’s first librarian, Lila Abbott. The box overflowed with islanders’ sentiments about Webster’s impact on the community and how she made everyone feel “comfortable” and as though they were “coming home.” Reciting a poem, Campbell fêted Webster as “a human welcome center who served her island with pride.”

Friends of the Peaks Island Branch Library board member Kathryn Moxhay told the capacity crowd that, for island children, “It’s impossible to separate you from the library. Priscilla-library. They are synonymous.” She then gave Webster an original piece of artwork by island artist Marty Braun that depicted the familiar scene of our island librarian commuting on her bicycle.

Priscilla Webster enjoys the original artwork made for her by island artist Marty Braun.

Another original artwork, this one by Paul Brahms, depicted Margaret Hasna Kelsey’s son at the moment of receiving his first library card. Kelsey said,

“What you’ve done for so many children, like my son, is that you’ve opened a world for a child. A world of curiosity. Not just the books. Not just the periodicals, but the community that you create. You make him feel like he has a home, that he can wake up on a Saturday morning and say, ‘See, ya, I’m going to the library.’ I’m indebted, as so many other mothers and father are, for what you’ve brought to our children. You’re more than a librarian. You’re a friend.” 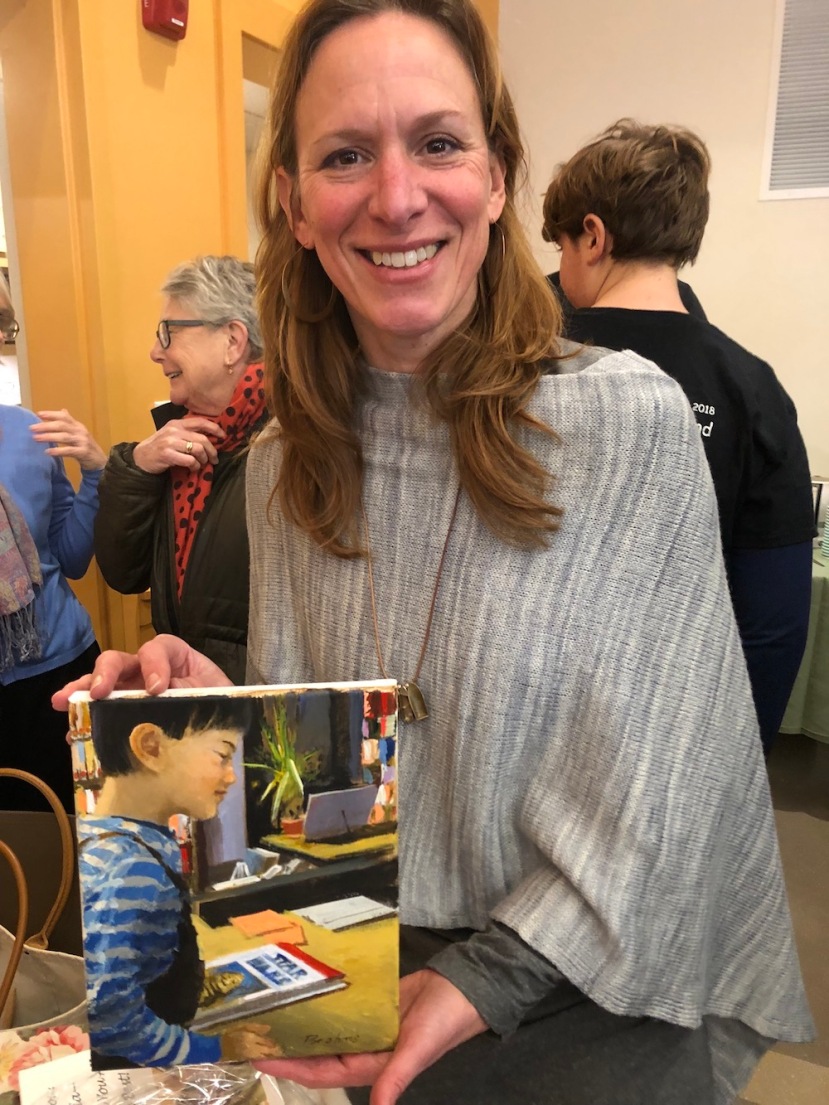 Margaret Hasna Kelsey holds an original painting by Paul Brahms which she gave to Priscilla Webster. It depicts her son, receiving his first library card.

Indeed, we are indebted to you, Priscilla Webster. May your next chapter have as brilliant a pace and plot as this last one.

For more photographs and a live video of the celebration, see the Peaks Island Press facebook page http://www.facebook.com/peaksislandpress/

Patricia Erikson blogs about Maine writers, travel, and science from a vibrant, literary community perched on Peaks Island, two miles off the coast of the beautiful and award-winning city of Portland, Maine. If you haven’t already, follow her on Instagram at @seashorewrite or subscribe to Peaks Island Press in the upper right corner at http://www.peaksislandpress.com